How Good Are "Grey's Anatomy" & "HawthoRNe" at Notifying Patient's Next of Kin?

Have you noticed how many primetime medical shows are doing episodes on next of kin notification issues? Just in the last two months there have been two – “Grey’s Anatomy” on ABC and the new TNT series “HawthoRNe”. Not that they meant to do episodes specifically about that, and as far as one of the series goes, that central theme was completely glossed over, even though a next of kin issue was pivotal to a central character’s survival.

Now I love “Grey’s Anatomy” – always have. And as a television writer myself, (who also happens to run a non profit organization that deals with family safety and patient notification issues), I’m always interested to see how those important themes play out in the drama of an episode. As most fans of the series know, the last two episodes of the season revolved around Izzy fighting for her life following cancer surgery and George O’Malley who, during the first half of the episode, decides to go off and join the Army to treat injured soldiers in Iraq. He then disappeared, as we later found, to say goodbye to his family before heading off to serve his country. In case you’re one of the ten or twenty people in America who didn’t see the episode, I’ll insert a spoiler alert. So if you haven’t seen the episode yet but plan to, skip down a few paragraphs.

A few scenes later an unidentified man is rushed into the emergency department. Hailed a hero, the man was hit by a bus after pushing a woman out of its path. The patient was a mess. He had a massive head injury, was covered in blood, his arm was nearly torn off and before he knew it, had the best residents of Seattle Grace looking down at him with pity. They doubted he would last the night, but they did what they always do and gave it their best. IVs were started, surgery was scheduled and they did a pretty decent job of caring for him.

Except for one thing.

No one, and I mean no one, not even Lexi the patient-loving intern, visibly searched for his ID.

Granted the man was run over and dragged by a bus, so finding his ID might have been a challenge, but he was still clearly wearing clothes. The writers could have easily put in a throwaway line to show them doing the right thing, like “I found a driver’s license, but it’s completely saturated with blood” or “this looks like an ID badge, but it’s crushed and completely unreadable. At least they would have not only given a nod to proper trauma procedure, but to the fact that the patient lying close to death was a human being. What if they were about to give him a drug he was deathly allergic to, or that was about to interact with something else he was already taking? What about the fact that this patient had people he loved and who loved him, who needed to know that he might not live through the night?

By the end of the episode, they were doing everything they could to save this patient. He was stable but still very critical. For the second or third time the man tried to talk, to no avail. Meredith leaned in, and the patient grabbed her hand. He started drawing on it with one of his only good fingers. Zero, zero and a seven. 007. George. He instantly went from being a John Doe to a much-loved friend. In that moment, Meredith’s eyes and scream told the whole story. It was the difference between taking care of someone you know, with his or her needs in mind – even if the only way you “know” them is by reading their medical history and talking with their family – and someone who is just another person or worse just another patient. They took incredibly good care of George even when they didn’t know who he was, but from our own experiences with my grandma’s hospitalization, when the hospital didn’t bother to call us for several days to tell us that she’d been admitted and was becoming more critical by the minute, the step of looking for identification and trying to locate a patient’s identity and next of kin, is just too vital to be glossed over like this. “Grey’s Anatomy” had the perfect opportunity to show how it should be done, and missed it. They usually do a terrific job, but this one decision was disappointing.

Now over on TNT’s new series “HawthoRNe”, they did a different twist on a next of kin issue. Nurse Hawthorne’s patient is alone and his wife isn’t yet on scene. He has a brain injury that will require surgery and is altered – meaning that he doesn’t really know what’s going on around him. While Hawthorne is treating him, he mistakes her for his wife and confesses that he has been having an affair. The man’s injuries intensify – he’ll need surgery – but of course he has a DNR. Hawthorne wants to make sure that her patient has the opportunity to see his wife before surgery to provide closure to both of them in case he doesn’t make it. The man codes. Now with a DNR, she’s supposed to stand aside, respect his decision and not resuscitate him. But his wife is going to be there any moment. Hawthorne is thinking about this patient as a human being and realizes how important closure could be to both her patient and his wife. The doctors standing around her keep telling her that he’s too far gone and just to let nature take its course. But she risks her career and her reputation, by grabbing the paddles herself and shocking him back to life, much to the chagrin of the doctors. The patient is able to talk to his wife and he survives his surgery. Why? Because a nurse treated a patient who on paper wasn’t mentally competent and who had chosen not to be resuscitated, as a human being who had a history, people who loved him and in this case, extenuating circumstances that could alter the rest of his wife’s life. A difficult issue was raised and handled in a way that was respectful to the patient, his family and the medical profession.

The one thing that the producers of medical shows need to realize is that a lot of health care professionals out there are watching. Not that anyone takes their cue on how to provide patient care from a television series. But it wouldn’t hurt to get the basics right like showing the search for an unidentified patient’s ID. Not only would we as viewers feel like everything that could be done for the patient, had been done, but it would serve as a reminder to all those health care professionals out there, of how important it is to quickly identify a patient to be able to treat him with his specific needs in mind, and not just as a body. And who knows? That two second scene of Meredith or Lexi searching for an ID that’s completely torn apart and unreadable, would have intensified the drama even more, because they’d have us all asking “who is this person and how in the world are they ever going to discover his identity?”

Thanks producers for all the excellent work you do on incredibly difficult subjects week after week. All we ask is that you look after the basics too :-)
Posted by Laura Greenwald at 9:48 AM 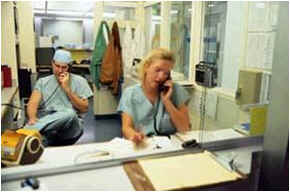