This morning in the Los Angeles Times there was a good editorial about the problems behind healthcare reform and expenditures, that have arisen even before the ink on the drafts of the 5 healthcare bills have dried. Even though the problems have been widely discussed of late, the editorial does a great job of explaining each one, instead of trying to find answers. http://www.latimes.com/news/opinion/commentary/la-ed-health22-2009jun22,0,3504596.story

As we’ve found in our own lives, as basic as it sounds, taking the time to identify the actual problem is a much better start than just jumping in and trying to solve them. As founders of the Next of Kin Education Project (http://www.nokep.org/), our attention was immediately drawn to the paragraphs on Quality of Care. According to the editorial:

“Dedicating so much of the economy to healthcare might be acceptable if the investment yielded the world's best results, but it doesn't. Despite spending far more per person and a far higher percentage of GDP than any other country, the U.S. lags behind other industrialized nations on most measurements of healthcare. These include higher death rates from medical errors and treatable diseases, and higher infant mortality, according to a 2006 study by the Commonwealth Fund. Defenders of the U.S. system often argue that patients in other countries face lengthy delays for care, especially from specialists or for elective surgeries. But the Commonwealth Fund study found that, compared with several other countries, "U.S. patients are notably less likely to have rapid (same- or next-day) access to physicians when sick or to find it easy to get care after hours without going to the emergency room."Even within the United States, there seems to be only a tenuous relationship between the amount of money spent on patients and the quality of care. Researchers at Dartmouth Medical School have looked at Medicare spending across the country, finding wide variation in the cost -- and, frequently, better results in regions where spending was lower. Nor have U.S. healthcare providers coordinated care for individual patients or helped them manage chronic diseases as well as their counterparts in other industrialized nations. Part of the problem is the slow, haphazard adoption of information technology, including digitized medical records, to guide patient care and prevent errors. Studies by the Rand Corp. in 2003 and 2006 found that U.S. patients receive the right care only about 55% of the time, and that the problem affects rich and poor, insured and uninsured alike.”

I’d like to add one more point to the discussion. Healthcare spending is often wasted on the repercussions of medical errors and simple mistakes that can easily be prevented. We had an experience in our family where my grandmother was hospitalized, yet the hospital didn’t call my mother and I, to tell us that she had fallen at home and had been admitted. By the time we found out, she'd been given drugs that interacted with those she was prescribed simply because they didn't call us to get a medical history.

Not only did that mistake end up costing Grandma her life, and us the chance to get to her bedside before her death, it cost the hospital itself unnecessary liability and the increased costs of intensive and cardiac care that would not have been necessary if one simple phone call had been made. In her memory, our solution was to create a next of kin notification training program that hospitals across the country are now adopting. But when problems that simple are identified, additional training, is a simple yet effective way of stemming unnecessary cost drains on our healthcare system.
Posted by Laura Greenwald at 4:39 PM

Why We're Doing This Blog

We’ve all seen patients who were far beyond the reach of medical treatment suddenly defy the odds and recover. We’ve also seen patients who were well on the road to recovery, take a turn for the worse for seemingly no reason at all. No matter what the technology or how terrific we are at our jobs, sometimes medicine just isn’t enough.

Case in point, a few years ago, my Grandma, in her mid-sixties at the time, had a moderate CVA. No matter what her doctors did for her, she wasn’t regaining consciousness, defying explanation. My mom and I were living and working in Los Angeles and Grandma was two thousand miles away in Chicago. When the doctor called to tell us about the stroke, he not only said that Grandma might not live through the night, but that she might not last the few hours it would take us to fly to her side. Mom and I both felt very strongly that we had to talk to her for what might be the last time, before we got on the plane. Hearing our voices and knowing that someone was with her, had always made a huge difference in any difficulty she faced. So Mom got the head nurse on the phone and asked if she could get a phone to Grandma. Asking quickly turned to pleading – we needed to tell Grandma to hold on and that we were coming.

The nurse basically dismissed the notion – what possible good could THAT do? It took a while, but Mom finally convinced the nurse to put a phone up to Grandma’s ear. We were able to tell her how much we loved her, that she was going to be fine and that we were on our way. By the time the nurse came back on the phone, she was speechless. Evidently the moment Grandma heard our voices her eyelids began to flutter. Her vitals stabilized, her eyes opened for the first time since she’d been in the hospital and she looked straight up at the nurse and then around the room looking for us. Two weeks later, she was out of the hospital and on her way to rehab.

That’s the miracle of communication.

Whether it’s a family member, a friend or just a familiar face, patients need to have the people they love surrounding them, when they’re ill, in pain, or afraid. As caregivers, it’s part of the job to realize that patients might be too ill or physically unable to initiate the contact they so desperately need, on their own.

I wish that were the end of the story. A few years later, Grandma who had recovered fully, badly injured her leg and her jaw after falling in the bathroom at home. She was unable to speak but was in stable condition, when admitted to a different hospital. She was supposed to have gone on vacation so we hadn’t expected to hear from her and had no idea she was in the hospital. A few days later she began spiraling into critical condition. By the time the hospital called us, she was in the ICU, unconscious and critical. While I was on one phone trying to get a flight, my mom was on the other phone with the doctor who happened to be standing right outside Grandma’s room. She begged him and then the nursing staff, to get a phone into her, so she could talk to her, for what looked like it would be the last time.

But at this hospital, the doctor and the nurses refused. While the doctor was on the phone with mom, Grandma, who had been unconscious just a few minutes before, unexpectedly opened her eyes and began to look around. The doctor told Mom what happened and took this as a sign that she her condition was turning around. Even so, Mom still pleaded with him to get a phone to Grandma. He told her there was no way to get a phone to an ICU patient. “We’ll try and figure something out in the morning,” he said, hanging up the phone. But Grandma didn’t have until morning. She died just a few hours later, before we could get to her and we lost our chance to tell her we loved her – our chance to say goodbye.

Looking back on that time reminds me of that scripture, “without a vision, the people perish”. Some people, even while facing serious illness or death are so self-motivated that just the possibility of dying makes them muster every ounce of strength they have, to fight it. But most people aren’t that way. Most people need to use the strength of others – the people they love – to provide the strength they cannot find.

Patients need connection. They need vision – the vision to “see” themselves getting through the darkness and fear that they’re facing. They need help “seeing” the next day or the next week. Seeing themselves strong and well again. And without that strength and that support they so desperately need from the people they love, there is no vision. And without that vision, they perish.

Simply put, at that moment, Grandma needed us. She needed to hear our voices that night and the very people who were there to be her advocates and to help her make that connection happen, didn’t do it. And that night, Grandma perished, without knowing that we were right there at the other end of that phone and on our way to be with her.

The good news is, the same thing that happened to us, doesn’t have to happen at your facility. With just a few simple steps designed to help communication-impaired patients, you can not only make a huge difference in their lives, you might even save them.

With just a few simple steps designed to help communication-impaired patients, you can make a huge difference in their lives. How? Stay Tuned
Posted by Laura Greenwald at 9:26 AM 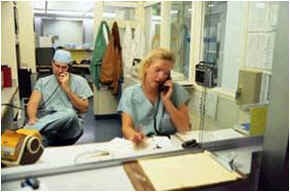